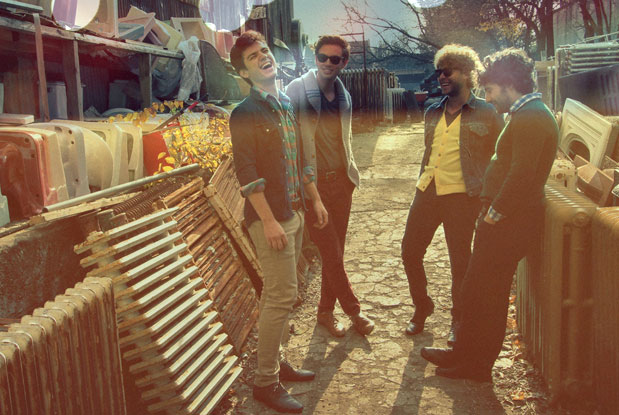 Springtime is upon us (as is the weekend), so celebrate both with our round-up of events, including a late-night garden party, an avant-garde film and media festival, a showcase of independent music, and a selection of arts markets to ensure that you're fully stocked with gifts for Easter, Mother's Day and beyond.

When: April 10, 7 pm (opening night film)
Where: Royal Cinema, 608 College St.
Details: Images Festival began in 1987, and is North America's largest festival for experimental, on-screen media projects, but also features live performances and art installations. The festival's 27th instalment kicks off tonight with From Gulf to Gulf to Gulf, and the festival will continue until April 19.

When: April 11, 10 pm
Where: Lithuanian Community House, 1573 Bloor St. W.
Details: Spring has sprung, so welcome it properly with the Promise Garden Party, which will see the Lithuanian Hall transformed into an indoor garden party. There will be snacks, there will be drinks, and yes, there will be face painting—as well as an assortment of DJs. Advance tickets are $40 (plus service fees). You'll want to stow away your black frocks and suits for this soiree, and don some cheerier hues.

When: April 13, 10 am
Where: Centre for Social Innovation, 720 Bathurst St.
Details: The third instalment of the Annex Flea returns to the CSI this weekend. Instead of trolling vintage stores, stop by this one-stop shop featuring ethical seeds from Cubit's Organic, organic beauty products from Eli's Body Shop, as well as vintage clothing and "curiosities" from Bragg & Bee (among others).

When: April 10 to 13
Where: Metro Toronto Convention Centre, 255 Front St. W.
Details: The Toronto Expo returns for a 12th year this weekend, and will feature paintings, glass work and sculpture from up to 200 artists from around the world. The show aims to offer fine artistic finds at a variety of price points, suitable for both first-time and seasoned buyers. Opening night festivities will take place on April 10, 6 pm to 10 pm.

When: April 12, 10:30 am to 4:30 pm
Where: Gladstone Hotel, 1214 Queen St. W.
Details: If you've had enough of mass-produced everything, stop by the Gladstone for this mixed media market featuring over 50 artisans—remember, Mother's Day is just around the corner. Stock up on delightfully intricate prints from Ashley Lennox Illustration, one-of-a-kind pieces from Hepburn & Burns, or sweets from All Mine Caramel. Admission is $5.