What if he didn't tell you he was taking Viagra? | TRNTO.com
Skip to content 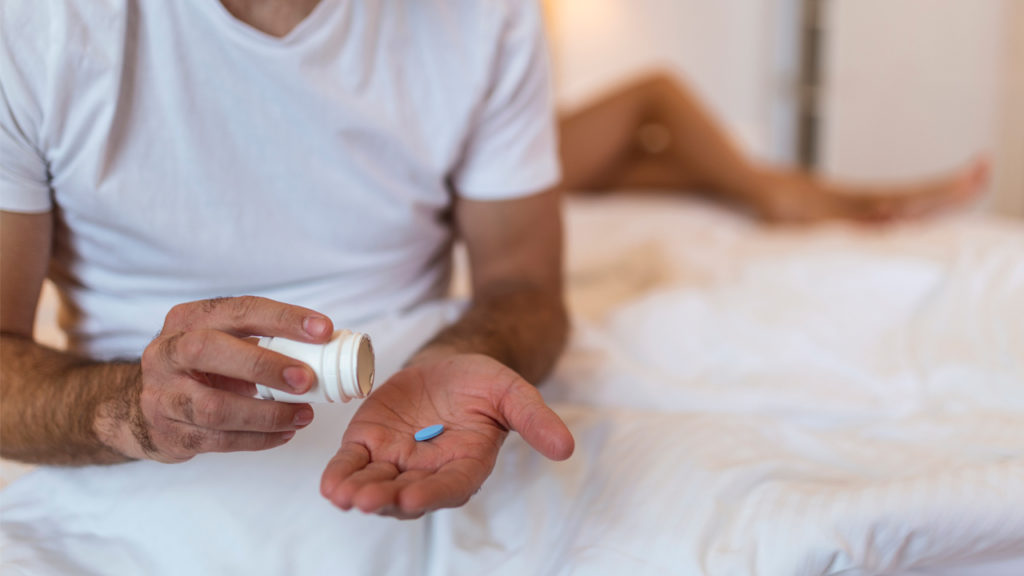 This is a story about a little pill called Viagra and an uncomfortable situation.

I’m not going to divulge a timeline for fear someone will assume I’m writing about them or friends reading this will think they know who I’m talking about. I learned a very valuable lesson from this man — don’t ever ask about Viagra.

Rather, do not ask the man you are seeing if he is using Viagra, especially when you know he may be. Let me explain.

Sometime in the past — it could be yesterday, or 10 years ago — I decided to do a favour for the man I was dating. I picked up a prescription for him from a pharmacy that was near where I was headed. It was an antibiotic for an ear infection.

I paid and took the drugs to my place, planning to give them to him later when we hooked up. Stapled to the bag, I noticed, was a small piece of paper with all his past drug pickups.

I couldn’t NOT look.

I wasn’t snooping. It really was stapled on the outside of the bag. My eyes skimmed over the list of antibiotics, and then I saw the word “Viagra.”

I wasn’t sure whether to laugh (Come on, it’s Viagra! I thought people just spammed me about that) or cry (He’s around 40. Did he have a serious issue that I didn’t know about?).

Let me just say, for the record, that one of the places (and more often than not the ONLY place) we got along was in bed. In bed,we were so compatible, so exciting, it was like a fireworks on New Year’s Eve kinda thing.

But now I knew he had gotten a prescription for Viagra, and I was plagued with self-doubt and so many questions. Did he use it regularly? When did he take it? While brushing his teeth? On the way over? And why didn’t he tell me? And why didn’t he offer any to me? (Not that I would have taken it, but don’t leave me out of the fun, mister!)

I left him a voice mail message saying, “Viagra? Really? You use Viagra?” (I probably shouldn’t have been laughing when leaving that message.)

Later, face to face, I asked him about it again. “I don’t want to talk about it,” he stormed.

“No!” he snapped. “I just wanted to try it out. I asked my doctor for one pill, just to see what it was all about.”

It was like telling a man that his hair is thinning. Another no-no, even if it’s true. I couldn’t help but giggle, which didn’t help out matters.

I left it at that, except I did ask every girlfriend I have if their partners use Viagra.

“No, my boyfriend doesn’t use it, but I have a friend who uses it with his wife. They both say it’s the best sex they ever had. It just enhances their experience.”

“No, my husband doesn’t use it. Not that I’m aware of,” said another.

Not one of the 10 women I talked to knew if their partners took the little blue pill. I asked practically every guy I knew if they use Viagra or have tried it.

“Hey,” I’d say. “I know you’re busy but I have a quick question. Have you ever tried Viagra?” It’s a great start to a conversation, trust me.

Every man I talked to wouldn’t admit they used the drug, and yet, oddly, every single one of them “had a friend” who did. Also strange how every single male I talked to said,“No, I can always get it up.”

The little blue pill is actually sildenafil citrate and is used to treat erectile dysfunction, just so we’re all clear. It is sold as Viagra by pharmaceutical giant Pfizer.

When it was introduced in the late ’90s, there was a well-documented cult of recreational use among younger adults.

Apparently, even professional athletes have tried it to give them an edge over the competition. We’re all adults here, right? I mean, it could be fun if both parties are in on the act.

I asked my female friends how they would respond if they found out their men used Viagra and didn’t tell them.

“I wouldn’t care,” said one of my married friends.

“I just wouldn’t want him putting a drug into his body that really wasn’t necessary.”

Another friend says she wouldn’t care if she found out her boyfriend used it.

“Although, I guess it depends where he kept it. I mean, if he kept it in his car, I’d wonder why and that would be shady. But if he kept it where I could see it, then I’d be OK with it.”

Men are strange creatures. Women don’t care if you use Viagra. You can tell us.

I’m not sure if my guy took it regularly or really just was trying it out. I was sure, though, that he wouldn’t be asking me to pick him up any more prescriptions.

This article was originally published in 2010.