When getting a D in school is actually a good thing | TRNTO.com
Skip to content 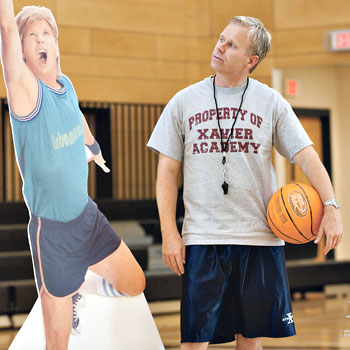 Canadian sitcoms are a rare and endangered species. Expensive to make and often a win-or-lose proposition, the very existence of a new one is a small victory for comedy fans.

CBC’s new entry in the field is Mr. D, starring Toronto’s Gerry Dee. He’s a pretty good gamble as these things go: he’s good-looking, respectable, mainstream, with a background in teaching and sports. You can see how executives could drool at the package.

Dee comes with over a decade of stand-up experience and his own fan base — an actual fan base, not the Facebook kind. He’s one of the few Canadian acts that can sell out mid-sized theatres across the country.

Dee has come close to making it in the United States a couple of times. First, as a Star Search winner and then as a finalist on NBC’s Last Comic Standing. He did humorous sports commentary on The Score, and paid his acting dues in films such as The Trailer Park Boys Movie.

The show Mr. D gets its inspiration from Dee’s former life as a teacher and sports coach at Toronto’s De La Salle College. When I heard the show was in development, I heaved a small groan, thinking that kind of show had been done to death. But the show is a departure from its predecessors such as Welcome Back, Kotter. It’s more interested in the relationships among the teachers and their internal politics than the interplay between teachers and students. The obvious warm and fuzzy lessons are (thankfully) absent. The show is shot in that single camera set-up pioneered by The Office. And although I wouldn’t call it edgy, it has an absurd quality to it that makes it a little different than most other Canadian sitcoms.

After watching the first four episodes, I’m impressed with what the show wants to be. Like The Office, it’s a study in institutional incompetence, only this time it’s a high school. However, I did find it a bit ridiculous that just about every teacher and administrator, including Dee himself, is a lazy buffoon.

Dee surrounds himself with a big cast that may get whittled down as certain characters catch on and others don’t. His romantic interest, a fellow teacher, is ably played by Lauren Hammersley, with a dreamy quality reminiscent of a Gwyneth Paltrow. Of course, Dee is clueless about any potential romance. I also like Darrin Rose as Dee’s best buddy outside the school. His line readings are effortless, and he brings a lanky physical grace to the role. And any television show that has the good sense to cast improv greats Bette MacDonald and Naomi Snieckus gets automatic kudos in my book.

A more conventional way to play the story would be to have Dee as the sane one amidst all the chaos. This tends to be the way his stand-up acts work — “nice guy” Dee in a world that often baffles him with its incongruities. But Dee took a big risk in presenting himself as a slacker doofus, and you have to respect that.

But the show still needs work. Dee sometimes veers from meaningfully absurd to downright silly. The dialogue should be a lot crisper. And there are just too many characters right now.

All of this may change as the show finds its legs. Even the first episodes of Seinfeld had problems.

Mr. D is meant to be a family show, but it has an anarchic side that no one will let out. And maybe that’s why I’m not laughing. But I am watching.