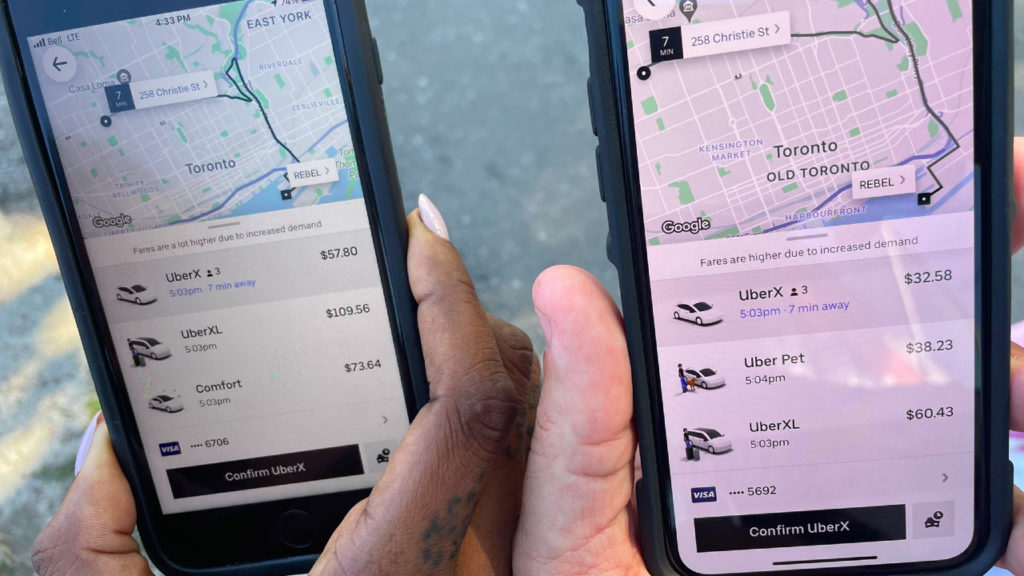 Torontonians are sharing stories of potential racial discrimination through ride-sharing algorithms after a Twitter user shared a photo of the vastly different charges he and his friend received for an Uber ride going to the same place at the same time.

Toronto artist Adam Bomb shared a photo on Twitter this week of his Uber app on his phone versus his friend’s Uber app. His friend, a Black woman, showed a $57.80 charge for an Uber that is seven minutes away. His phone? $32.58 for the same distance and time.

Just tell me the reason isn’t what I think it is, @Uber pic.twitter.com/5Tn1sYZnSS

Bomb explained that he ordered the Uber just three seconds after she did, both of them heading to Rebel music venue. The pair have almost the exact same star rating.

Social media users erupted with stories of their own where they experienced similar inexplicable additional charges.

Y’all are late airbnb does the exact same thing. I was shook when i realized i was getting charged $100+ more than my s/o.

Lol, it most certainly is. My partner and I even joke about it now and we just order off his application.

While many, including the ride-sharing company itself, have tried to explain away the discrepancy as a product of the app’s surge price, the incident has resulted in wider reflection about the bias embedded within everyday technology. A recent preprint study by George Washington University researchers found evidence of bias within ride-sharing algorithms. The report found that dynamic pricing resulted in increased fairs for dropoffs in neighbourhoods with higher non-white populations due to larger amounts of residents who use the apps.

Uber responded to Bomb’s tweet, stating that “Uber is committed to being an anti-racist company & has no space for discrimination,” despite the fact that Bomb hadn’t mentioned race in the original tweet.