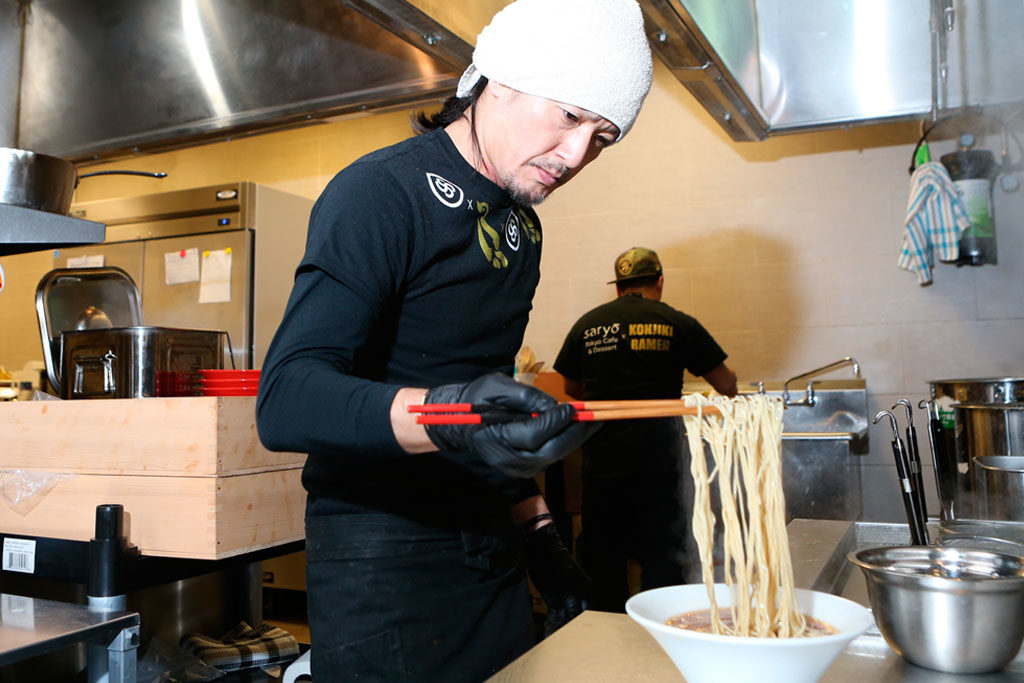 On an otherwise humble street in Tokyo’s Shibuya district sits an unassuming doorway. If it weren’t for the orderly queue that forms daily on the sidewalk outside, the space wouldn’t warrant a second glance.

But as per familiar lore, a plain exterior belies a rather extraordinary interior.

Inside, the entryway opens up to a minimalist room with eight seats occupied by patrons silently slurping back bowls of ramen. This tiny ramen shop has earned Michelin Bib Gourmand status (one level below a Michelin Star) for three consecutive years since 2015, making Konjiki Hototogisu one of world’s top destinations for the beloved Japanese comfort food. And as luck would have it, Toronto is about to receive its own outpost of the shop: Konjiki Ramen.

“I was not born in a rich family; ramen is a thrifty eat in Japan,” says chef Atsushi Yamamoto, the mastermind behind Konjiki Hototogisu, which landed on the Tokyo scene back in 2006.

Growing up in the Japanese capital, Yamamoto recalls enjoying the dish at a young age: “A bowl of hot ramen at a street stand in winter is the best possible memory.”

“I like ramen. It is a simple soul food to a lot of Japanese,” Yamamoto says.

In his early 20s, Yamamoto found himself working at a famous Tokyo ramen stand. This experience was eye-opening to the future entrepreneur, and it was Yamamoto’s first contact with the world of ramen.

“I worked there days and nights for about six years, and then I fell in love with ramen,” he says.

He began to examine the composition of this seemingly simple comfort food, unpacking the elements that join together to create the dish.

“I deconstructed every component of a bowl of ramen, tried to perfect it and created my own version of the best ramen in Japan,” Yamamoto says.

Traditionally, ramen broth is available in two iterations: shoyu (soy sauce based) and shio (salt based). Miso (soybean) and tonkotsu (pork bone based) are popular regional broths that are the result of evolution.

After deciding to open his own ramen shop, Yamamoto bucked tradition, offering customers his own unique version built on clam broth. Why clams? For no other reason than he loves clams!

Toronto’s Konjiki Ramen is gearing up to open at 5051 Yonge St. in North York — a strip increasingly recognized for its wealth of Chinese, Korean and Japanese eateries. Foodies from across the city head to this Asian food utopia with goals like Owl of Minerva’s gamjatang and Artisan Noodle’s bian bian miang in sight. Ramen is also plentiful. A glut of ramen shops, like Ajisen, Kenzo and Sansotei, dot the streetscape. The noodle equivalent of a pub crawl could be accomplished with ease (though perhaps less ease for the stomachs in question).

“I see this as a positive force to constantly remind myself to offer the best of myself,” he says. “New York and London are too expected for an overseas expansion. I like places with special character. I can’t wait to see the chemistry between my ramen and Toronto.”

Inside, Konjiki will differ greatly from the Shibuya shop. Rather than cater to eight patrons, Konjiki Ramen will boast 40 seats in a comparatively sprawling 2,300-square-foot space. Whereas in Tokyo diners order their ramen via a rather spiffy vending machine, T.O.’s noodleheads will order their wares the old-fashioned way. That’s not to say that Yamamoto hasn’t ensured that the kitchen is up to Japanese standards.

“We want to bring the taste as close as possible to what we have in Japan,” Yamamoto says. “Our ramen noodle-making machine is imported from Japan, as well as the stock pot and other cooking utensils, bowls and chopsticks.”

When it comes to the menu items, there are common threads linking North York to Shibuya.

“We will serve our signature ramen — the one with clam broth — plus some special ramen designed just for Toronto,” Yamamoto says. In addition to the clam-based broth, the dish that got the Michelin nod, Konjiki will ladle out classic soups. The secret-recipe noodles, which are spun out of the imported machine, are cooked in filtered water, a.k.a. Pi water, which is a key element.

Yamamoto notes that, due to the size of T.O.’s Konjiki, it’s not feasible for the menu to shift shape as frequently as in Tokyo. However, the weekends will call for some playfulness, with rotating flavours of ramen dotting the menu. “Stay tuned …” Yamamoto says.

At his Tokyo shop, Yamamoto’s  ramen has scooped up a number of accolades, including Walker magazine’s top Tokyo ramen pick three times, as well as the Tabelog Japan Best Ramen Award 2016. But, of course, there is nothing quite like gaining the stamp of approval from Michelin.

“The Michelin Guide’s recommended restaurants are not solely judged on food,” Yamamoto says, noting that the revered food guide also considers the ambience, decor and service of a restaurant.

“My shop in Tokyo is a self-serve, eight-seat ramen stand located in an alley. I am so honoured at Michelin’s recognition purely on the quality of my food.”

When it comes to ramen, Toronto hasn’t seen anything yet.