Why local malls are trading hands at such a torrid pace | TRNTO.com
Skip to content 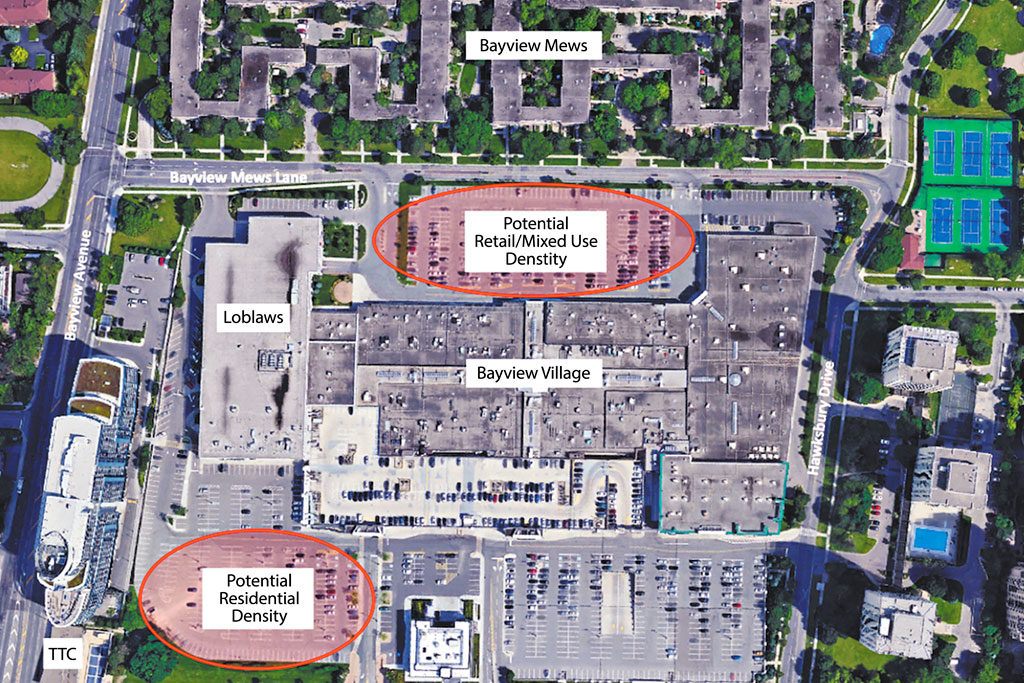 Large pieces of developable land in the Toronto area are in high demand, but the supply is very low. Low-density neighbourhood shopping malls with a sea of parking spaces, such as Bayview Village and Galleria Shopping Centre, are being eyed for major redevelopment projects from downtown up to Richmond Hill. Residents faced with such major changes to their quaint areas are not always overjoyed about the prospects.

David Amborski, director of the Centre for Urban Research and Land Development at Ryerson University, said local malls are some of the last remaining parcels of land available for redevelopment in Toronto, and real estate investors and developers are seizing the opportunity.

“I think a big thing is a shortage of land supply. These companies have portfolios that they’re building across Toronto. The issue is it’s very difficult to find sites to build at,” said Amborski.

But that’s only one piece of the puzzle. Amborski said he believes part of the trend also stems from a change in shopping patterns, and malls are taking a big hit.

Anchor tenants have closed up shop at malls across the country, and that’s had a major impact.

Sears recently announced it will be forced to close many locations and lay off more than 2,000 employees as part of a court-supervised restructuring process. Target closed all of its Canadian stores in 2015.

“I think more and more people are buying online,” said Amborski. “These marginal malls are not doing very well financially, so people are happy to sell them if they’re offered a good buck. Then hopefully the people who buy them get rezoning to build residential.”

Last year, a plan for two towers on the Bayview Village parking lot was brought to the public for feedback.

Toby Wu, senior vice-president of development with QuadReal Property Group, which will take over management of the property in 2018, said that a new rezoning application for the site will be submitted to the City of Toronto this month.

“We have been working with the community and councillor David Shiner [of Ward 24, Willowdale] with our consulting team for the overall master plan for Bayview Village,” said Wu.

He would not disclose the details of the new plan, but said it will not include Bayview Mews, a rental complex across the street that is also in the company’s portfolio.

Further north, the Promenade Shopping Centre in Thornhill was recently sold to Promenade General Partner Inc., a company made up of Liberty Development Corporation and the Serruya family — the founders of Yogen Früz.

The purchase of Promenade has many residents speculating that the area will soon see further intensification.

“There’s no doubt that the retail environment is undergoing dramatic shifts.”

A separate developer, Toronto-based Torgan Group, has already proposed seven 27-storey towers for a site adjacent to the mall.

Local opposition always plays a part in how each site is redeveloped, and this particular proposal has spurred quite a bit of controversy among residents in Thornhill.

Sandra Yeung Racco, Ward 4 councillor for the City of Vaughan and a resident of the area, said the proposal has many community members concerned.

“We heard a lot of comments from residents, and they’re not happy with the proposal,” she said. “They don’t want something that will be too dense and too high.”

In an effort to get residents’ support, green space, public art and community amenities are being incorporated into new open-air retail spaces.

The Shops at Don Mills, owned by Cadillac Fairview, was one of the first enclosed malls to undergo a major transformation into an open-air shopping centre.

The development was designed to mimic an urban streetscape and includes community amenities such as a small green space used for activities like public skating.

Niall Collins, senior vice-president of development at Cadillac Fairview, said the revamp was part of a larger strategy.

“There’s no doubt that the retail environment is undergoing dramatic shifts,” said Collins. “The decision to launch an open-air mall … was based on trends toward urbanization and mixed-used developments. Toronto has seen great success with many street-front commercial districts, including Queen West, Bloor, Yorkville, etc., and we saw this as an evolution of that trend.”

However the concept was initially met with skepticism by the Don Mills community. More than 1,000 residents attended the public consultation for it back in 2006. Many opposed the built form and density, and local shopkeepers feared relocating during the redevelopment process, but the area has become a popular destination that continues to grow.

More condos are expected in the coming years, and plans for a public community centre on the northwest corner of Don Mills Road and the Donway West were finalized with the city in July.

The reimagining of the Galleria Shopping Centre, near Dufferin Street and Dupont Street, appears to be following the same pattern.

A plan for the site was proposed by Freed Developments and ELAD in 2016 and calls for a network of roads, tall towers to be used for residential and office space, a sizable public park, a new community centre and of course, retail space. However, it too has come under fire from residents for exceeding the city’s prescribed height limits — with 11 towers up to 42 storeys proposed.

The trend shows no signs of slowing down as more redevelopment projects are coming forward in the area around Hillcrest Mall in Richmond Hill and near the Dufferin Mall south of Bloor in Toronto.