Wild and crazy guy plucks to a different tune | TRNTO.com
Skip to content 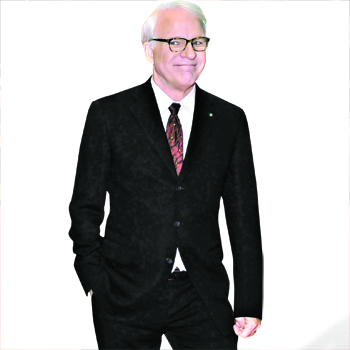 The banjo has been there for Steve Martin since he took up the instrument, when he was 17, as a small part of his stand-up comedy routine back in the ’70s, but more importantly as a coping mechanism, especially when he “got fried” doing stand-up before launching his movie and TV career that made him a household name around the world.

Now, with a new album entitled The Crow and a North American tour underway, his music is taking centre stage. The album features 15 original songs with guest appearances by the likes of Dolly Parton, Vince Gill and Earl Scruggs. Martin appears with the Steep Canyon Rangers in Toronto on Oct. 15 at Roy Thomson Hall.

When did you first start playing the banjo, publicly? When I started doing comedy, I didn’t really have enough time, so I just put in everything I know. I did magic tricks. I juggled and I played a few songs on the banjo. And that’s how it all got started. And basically the act never changed. It just got bigger.

There has been a number of actor turned rock ’n’ roller stories, recently. Did any bad precedents from other actors make you second guess yourself? I think I know the kind of thing you’re talking about: that the actor — we’ll call them the actor or actress, or whatever … what they really want to be is a rock star rather than a rock musician.… I think that the difference here is I really just want to play my songs, you know.

How different was it to go from playing these songs in your living room to recording them with the likes of Dolly Parton? It’s a major difference when you write a tune and then you have the absolute best possible people for that song recording it. It almost seems unfair, you know, that they’re making it into magic.

What is the attraction to banjo and bluegrass music? Well, it’s interesting because, you know, when I was younger … I didn’t quite go for the, you know, tenor, high-voiced, deep Monroe bluegrass. But now I do. Now I really understand it because I’ve had a long time to listen to it. And I love listening to the banjo … and I love when the fiddle and banjo are talking to each other. And I feel it’s, with bluegrass, it’s, you know, it has a lot of drive, and I love that.… It has a lot of drama in the music.