Winning advice from a cycling champ - TRNTO.com
Skip to content 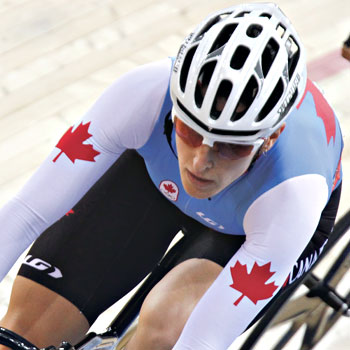 Canadian cycling champion Tara Whitten proves that it’s never too late to follow your dreams — all  the way to the Olympics. The Toronto-born athlete started cycling in 2007, and in just five years, she was representing Canada at the London Games.

She began her athletic career as a cross-country skier, but after failing to make the Olympic team, she decided she needed a change. While she thought about posisble new careers, she kept up her fitness by biking.

It was during those casual bike rides that Whitten realized she was quite good at cycling; in fact, she was very good. She had found her new career and her new passion.

“I got to the point where I was good at skiing, but I would never make it to the Olympics.”

Whitten’s realization highlights the importance of regularly evaluating one’s goals and dreams. Kids can often get swept up into a particular sport or hobby without thinking much about it, but it may not be what they really want to do or are even best at. Encouraging them to consider their options can lead to remarkable results.

“When I started cycling,” Whitten explains, “everything seemed to click. Pretty early I had a sense that I had potential in that sport. Probably around 2008 I was definitely thinking about London and thinking it was a possibility.”

Even before considering taking cycling to the Olympic level, the pastime had always been a part of her life. Like many youngsters, she first learned to ride a bike from her dad, who happened to be an avid mountain biker. Family biking trips were common in the Whitten household, she says, and helped to instill in her a love of the sport.

Her advice for teaching kids to ride is to hold lessons first on the grass — the idea of a soft landing if they fall is comforting and can give them the confidence they need when starting out.

Failure, she says, is also an important part of the learning process, and parents shouldn’t shield their children from this. It teaches kids how to work harder to meet their goals.

Whitten’s own late entry into the professional world of cycling had its challenges. Despite her natural talent, she had to work hard to get her technique to the level it needed to be at to compete in London.

“The challenges were definitely on the tactical side of things. I had to learn a lot … developing a sense of how the race goes, what other people do while racing and how to react.”

The cycling champion muses that perhaps it was her background in skiing that helped her succeed.

“When I stepped away from skiing, I learned it wasn’t about the outcome but the experiences. So when I joined cycling, I wasn’t so focused on the outcome, and in some ways, that allowed me to perform better, it freed me to perform without that pressure.”

Since London, Whitten has been working toward her PhD in neuroscience at the University of Alberta. Knowing the career of an athlete is short, Whitten keeps up her studies and encourages all young athletes to do the same. She has always tried to stay balanced between her career in cycling and her other interests.

“I think that it is important to keep other things open, so I always did some school and then there were other times when I was totally focused on my sport.”