With a host of ethnic events in Toronto his week, it’s time to get cultured (and learn how to dance like a Ukrainian) | TRNTO.com
Skip to content 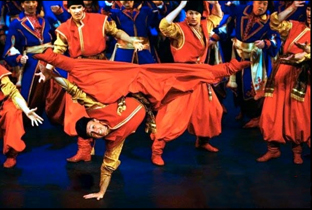 It’s a week full of festivals all over Toronto, so get on your dancing shoes for samba and polka, and then feast on perogis and bulgogi. Known by a variety of names, the Mid-Autumn Festival is celebrated all over East Asia; this week, it’s being celebrated all over the GTA. But there’s also a Polish festival and a Ukranian festival, as well as samba on Dundas. Read on to find out the where, when and why of this festi-full week.

Chuseok is the Korean Harvest Festival. In Korea, it’s a three-day holiday. Mel Lastman Square will be the site of two days of festivities this weekend — the biggest Korean community heritage event in Canada — with culinary demonstrations by Toronto’s best Korean chefs, presentations of taekwondo, dance, traditional music and a hanbok (traditional clothing) fashion show. There will also be dozens of food and product exhibitions and give-aways.

Tet Trung Thu, as it is known in Vietnam, is that country’s second most important holiday (the first being Lunar New Year). Traditionally, families get together to eat moon cakes, light lanterns and look at the night sky. The Vietnamese Women’s Association of Toronto and other community groups have organized a day of celebrations at Harbourfront Centre from 1 p.m. to 8 p.m. on Sept. 17.

The Roncesvalles Polish Festival, in its sixth year of celebrating Roncesvalles Village and its Polish heritage, is North America’s largest celebration of Polish culture and it’s only getting bigger. On Sept. 16-18, Roncesvalles from Dundas to Queen will be a pedestrian-only zone with six stages presenting Polish dance troupes, local musicians and North America’s finest polka bands. Take your kids to see the Family Fun Stage, face painters, and fire jugglers; don’t take your kids to the Tyskie and Luksusowa Beer Gardens. And for food, there is, of course, everything Polish: bigos, pączki, pierogi and kielbasa, plus many other options at the varied restaurants of Roncesvalles Village.

The Bloor West Village Ukrainian Festival came about after Toronto and Kiev became twin cities in 1995. Now in its 15th year, this is North America’s largest Ukrainian street festival. Running Sept. 16-18 on Bloor St. W., between Runnymede and Jane subway stations, this year the festival will be especially big, celebrating the 120th anniversary of Ukrainian settlement in Canada. Get your fill of concerts, kiosks, midway, pavilions, food and performers from the Ukraine, U.S. and Canada (including the Suzirya Ukrainian Dance Theatre, pictured above).

The fifth annual Samba on Dundas is a multicultural celebration of Brazil and beyond at indoor and outdoor venues along Dundas West between Lansdowne and Lisgar (Little Portugal) this weekend (Sept. 17-18). Catch capoeira, percussion workshops, karaoke, poetry, dance lessons, comedy, kids’ activities and store specials. (Dundas West will remain open to vehicles and the TTC throughout the weekend.)