Working the pass with passion | TRNTO.com
Skip to content 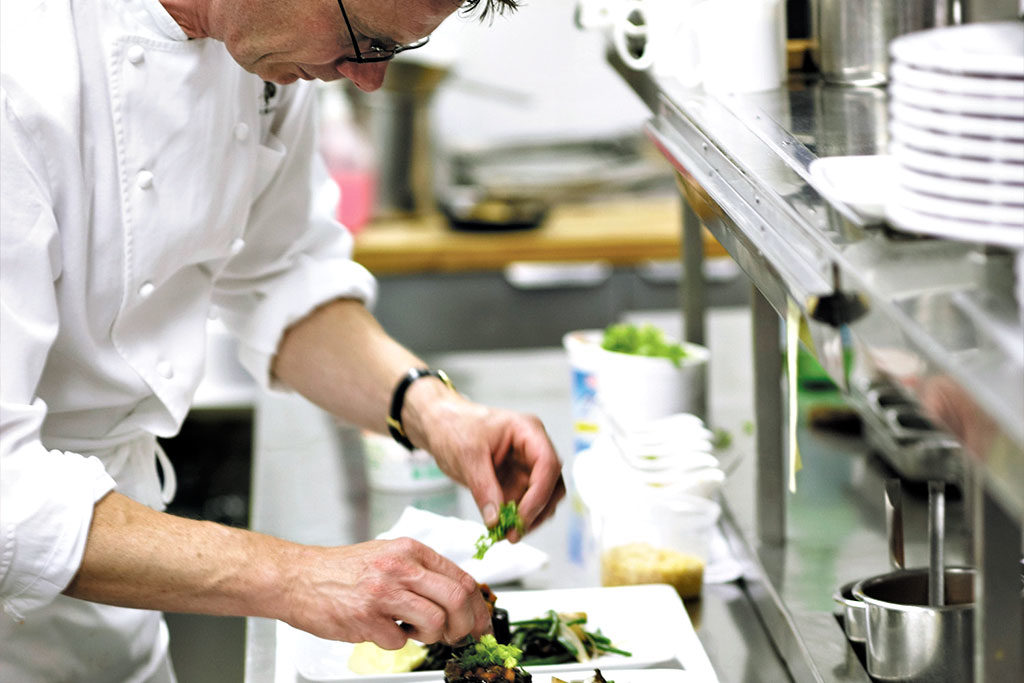 In this new restaurant renaissance, chefs are no longer simply the people in the back of the kitchen, turning out dishes — now, they are name brands and entrepreneurs. They’re business owners, Instagram influencers, celebrities. Among the most well-known chefs of the Toronto dining scene, only some of them still work their kitchens. The others are busy filming television shows, writing cookbooks or managing restaurant empires from afar.

Working the pass — kitchen lingo for standing at the counter to check that each dish is perfect, touch up each plate before it goes out to the diner and call out orders — is becoming a skill that’s not as important, for some, as Instagram feeds and offshoot restaurants. But here are three veteran high-profile chefs and one recent addition to their ranks who still show up to work every night.

Keith Froggett, the chef-owner of Scaramouche, has spent 25 years at the pass. As the last line of quality assurance between chefs on the line and the diner, he doesn’t intend to give it up any time soon.

“After so many years of working the pass, I still get a big knot in my stomach when service isn’t good, and it hasn’t gotten any easier, but you know what to expect,” says Froggett, whose restaurant routinely winds up on lists of Canada’s best restaurants, with accolades in places like Condé Nast Traveler and the Globe and Mail.

Recently, Grant van Gameren has been confronted with this issue of responsibility. After years floating in and out of his kitchens while simultaneously  running his expansive restaurant empire and raising a child, he can lately be found working the pass at Quetzal, a Mexican restaurant he owns on College Street. This past January, he had a falling out with his founding chefs and partners, which resulted in them leaving the restaurant.

“It didn’t work out, but at the end of the day, I have all of my life savings invested into this restaurant that took three years to build — we spent double the budget, so I have to take accountability and make it work,” says van Gameren, who owns eight restaurants with a combined 350 employees. Van Gameren, 37, is a father of a young son and his second child is a few weeks from being born. He has been working the pass at Quetzal seven days a week.

“It’s my mess to clean up,” he says, adding that working the pass reminds him of his first big restaurant, the Black Hoof, which he co-founded in 2008 with Jen Agg.

“Working the pass now and cooking the food brings me back to where I started, and it’s invigorating,” he says. “It’s like the last five years never happened. It feels like good muscle memory, like I’ve been in the kitchen my whole life.”

Van Gameren doesn’t intend to work the pass at Quetzal forever. He estimates that he’ll be back to his other projects by the summer. But until then, he’ll be at the pass.

“It’s clarifying,” he said. “Friends know not to call or email, and my attention isn’t divided — everyone knows I am in the kitchen.”

Nuit Regular co-owns seven restaurants, including the popular Pai Northern Thai Kitchen, Kiin and Sukhothai, overseeing a few hundred employees. Over the last five years, she has become one of the most well-known chefs in Canada and one of the most prolific restaurateurs. But before moving to Canada, she worked as a nurse in northern Thailand. Well after changing the Thai food landscape here in Toronto, she still leans on her hospital’s organizational skills.

Regular spends most of her time in the kitchens of Kiin and Pai and can’t imagine a time when she wouldn’t work the pass. For her, it’s more than just food on a plate.

“Every time I miss home, I go back into the kitchen, and before I send out the food, I look at the food. It feels like my love and care, and I want to send it to the dining room, to be shared,” she says. Most of her team aren’t even hired as trained chefs. She takes home chefs, trains them for a professional kitchen and incorporates them into her line.

“I feel inspired by chef [Froggett],” she says. “Twenty-five years from now, I’ll be working the pass. I don’t know what else I would do.”

Brandon Olsen worked in the kitchens of the Black Hoof and Bar Isabel before striking out on his own with La Banane and CXBO Chocolates. Last year, he competed on Iron Chef Canada, and now he finds himself conflicted: at 36, he yearns to both be in his kitchen and grow his empire.

“If I take eight hours of my day to call service, those are hours I can spend doing something else in terms of growing business concepts. But I don’t ever want to not call service,” says Olsen. “I have to make some choices in the near future because I need to have a healthy lifestyle. Maybe that’s my dilemma right now.”

Meanwhile, Olsen, who owns one of the most acclaimed restaurants on the Ossington strip, continues to show up at his restaurant and examine each plate that exits his kitchen.

It seems like each restaurateur has their own recipe for not only a successful bottom line, but for the very notion of what success means to them. Keith Froggett measures his success one plate at a time. For him, staffing the pass at Scaramouche and its casual sister restaurant, the Pasta Bar & Grill, is enough.

“I think it’s important. To me, it makes me proud to take responsibility for every dish,” he says.