Yonge and Bloor will never be the same | TRNTO.com
Skip to content 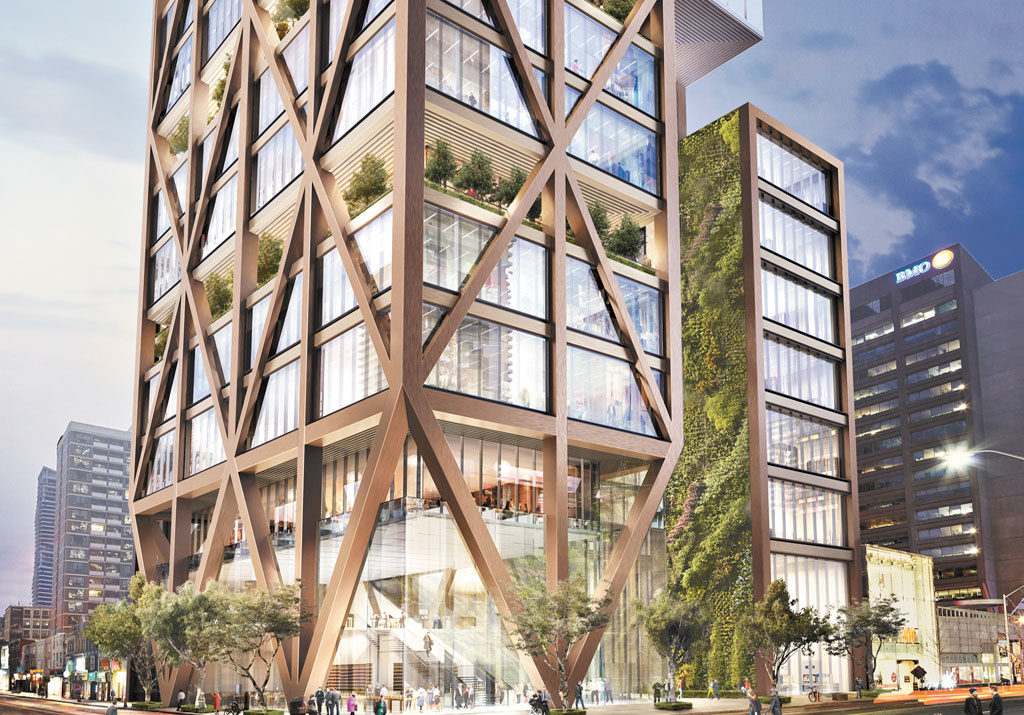 Developer Sam Mizrahi unveiled his vision for the former Stollerys site on the southwest corner of Yonge Street and Bloor Street on March 11 at the Park Hyatt Hotel. If the 80-storey, mixed-use tower receives the necessary approvals by the City of Toronto, City Planning department and Toronto City Council, it will be the second tallest structure in Canada, at 318 metres tall — just 225 metres short of the CN Tower.

Pritzker Prize–winning architect Norman Foster, responsible for the Gherkin Building in London and the Hearst Tower in New York — and who is currently designing Apple’s new headquarters in California — has been tasked with the design of the new building, alongside Toronto firm Core Architects.

The first eight levels will be reserved for retail and restaurant space, which Mizrahi said will attract international brands and landmark retail.

The building will be wrapped in a steel exoskeleton, what Mizrahi calls “jewellery” — public art with a structural functionality that allows it to be free of any obstructing interior columns. The upper tower will have about 9,000 square feet of condo space on each floor, allowing for 560 custom designed residential units.

“In the grand scheme of Yonge Street develop-ment, he’s got one of the smaller sites.”

The new project, called “the One,” sits on a smaller piece of land than either of its  neighbouring developments at 1 Bloor St. E. and 50 Bloor St. W., which will be 75 storeys and 71 storeys in height, respectively.

“There will be obvious concerns about the aggressive height of the building” said Ward 27 councillor Kristyn Wong-Tam, who cited residents’ concerns as a challenge that can arise “when a developer’s ambitions outweighs the size of their site.”

“In the grand scheme of Yonge Street development, he’s got one of the smaller sites,” said Wong-Tam. “Forty-five to 50 storeys has been largely accepted on Yonge Street … but it is important to note that Bloor Street is animated differently.”

But Mizrahi strongly disagrees. “If there’s ever a place in Canada that can support this type of height, it’s this corner,” said Mizrahi, before calling attention to the 75-storey and 71-storey towers going in nearby.

“There’s a tower cluster [happening] here. You have to look at it in context, and you have to look at the buildings that are coming in the next few years,” he said. “You get one shot to do it right. If you miss this opportunity, you miss it forever.”

A rezoning and site plan application was submitted to the City of Toronto, City Planing department Mar. 16 and is currently under review.