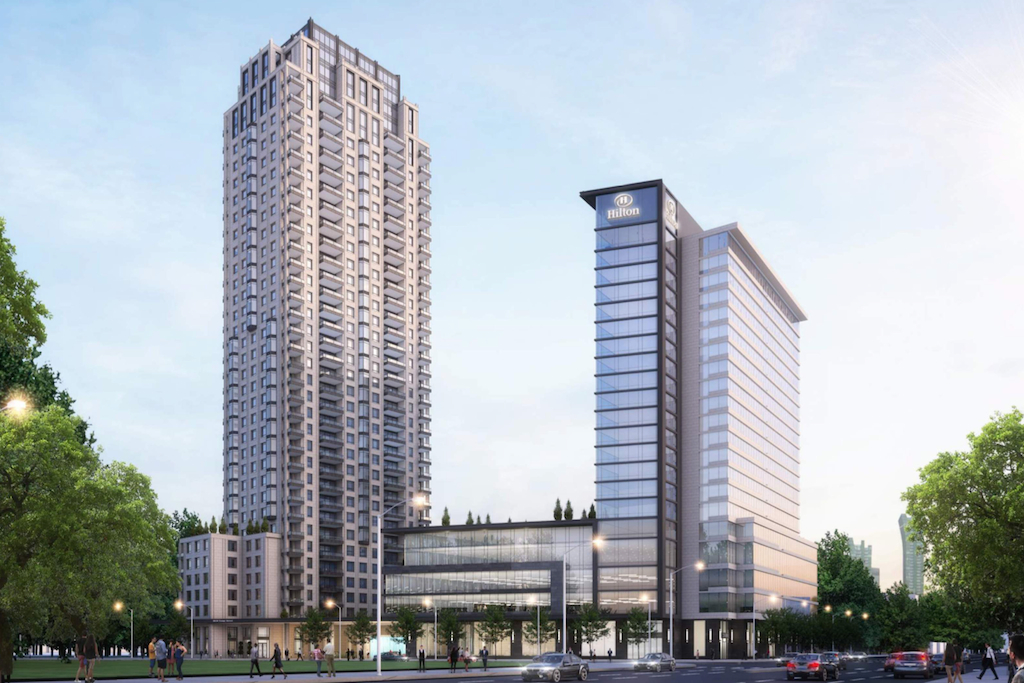 Two tall condo towers are being proposed for Yonge and York Mills that are more than double the height restrictions city planning has put in place.

The development is for 4050 Yonge St. on the northwest corner of the intersection, currently home to a large surface parking lot and entranceway to York Mills TTC station. The proposal includes a 35-storey and a 21-storey tower, both connected by a six-storey podium.

The towers would include up to 300 residential units, nearly 250 hotel rooms, and approximately 4,000 square metres of office space and over 900 square metres of street-level retail. The plan also integrates with the York Mills TTC station with an on-site entrance, if plans are approved.

However, the proposal greatly exceeds the nine-storey height limit city planning has put in place, which local councillor Jaye Robinson said is “worrying.”

“It’s a lot of excessive density done in an ad hoc way,” she said.

Robinson explained that this development application goes back nearly a decade and had been previously approved by the city when it was originally a nine-storey proposal.

She said that residents weren’t happy about that height at the time, so now that it is more than three times taller, residents are “very upset.”

That’s not to mention that the developer, The Gupta Group, did not consult with residents before appealing to the province-led Local Planning Appeal Tribunal (LPAT), where they may have better chances of getting approved than at city council, according to Robinson.

“They’re just completely usurping the city planning processes,” she said. “And they had the gall to [appeal] in advance of the public meeting — I mean, who does that? It’s literally gobsmacking that they did that.”

Six years ago, Gupta Group purchased the Hoggs Hollow land for the development for $25 million in a deal with the city of Toronto’s former real estate division Build Toronto.

Robinson said another height limit of 163 metres above sea level has been in place for the area since Mayor Mel Lastman’s days as mayor of North York. The measure is meant to prevent developments from reaching above the ridge of the valley.

Now with that limit potentially broken (the tallest proposed tower would be 250 meters above sea level), obstruction could become an issue for residents, along with “major traffic impacts,” strains on infrastructure and potential environmental issues related to erosion and flooding given the site’s proximity to the Don River, Robinson said.

“They’re just barreling ahead with something that does not really suit the neighbourhood and also sets a very worrisome precedent,” she said.

Local resident Mitchell Schnier agrees that the development is not right for the area.

He said the developer has not been open to feedback and is “hiding behind their consultants.”

The developer’s justification for the project is that the nearby Don Valley Golf Course has left little room for other developments, according to Schnier.

Robinson expects the proposal to go before the LPAT in April.