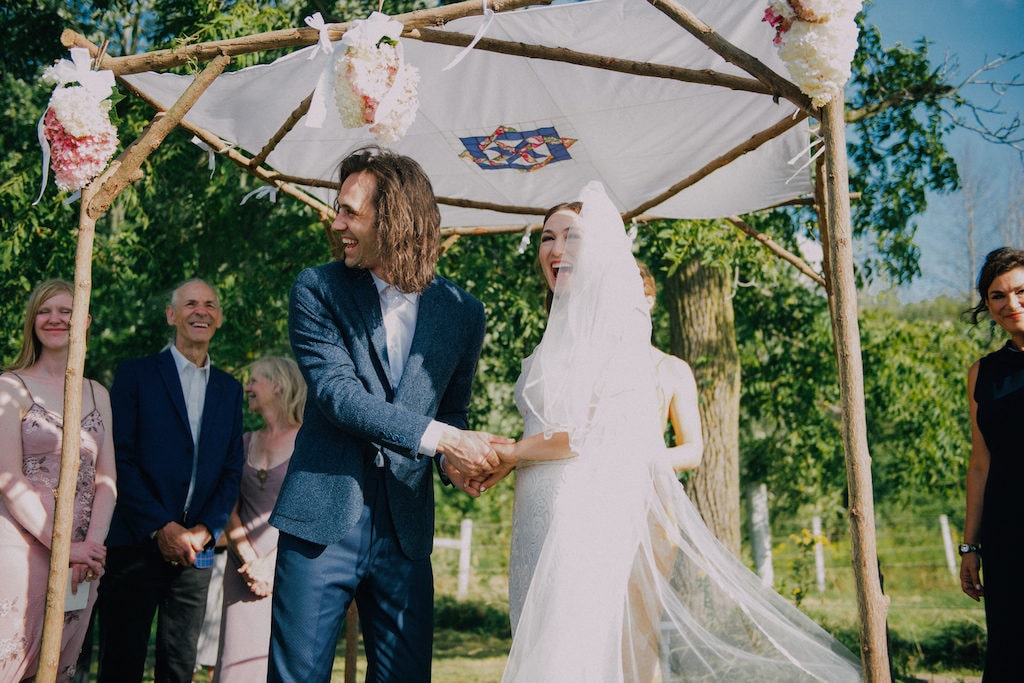 Last week, T.O. singer-songwriter Zoe Sky Jordan released her single, “Name On It.” Her name may sound familiar, as she’s the daughter of Canadian music stars Marc Jordan and Amy Sky. In music families and beyond, one thing tends to ring true — Mom knows best. This couldn’t be more true for Zoe, as it seems her mom was the matchmaker behind her and her husband (also a musician) Liam Russell. Here, the pair share the story of how they met.

Liam: Zoe’s mom Amy introduced us. I had known Amy through lobbying on behalf of content creators together on Parliament Hill. She had mentioned that her daughter was writing songs and wanted us to meet but nothing ever came of it. Then I ran into her a few years later at the Brick Works. She invited me to dinner at their house the next day under the pretence of seeing a mutual friend who would also be there. She never mentioned Zoe, but when I arrived and Zoe answered the door I realized that was probably the real reason I was there.

Zoe: We didn’t really talk at dinner but went for a drink afterwards and stayed out all night. I actually didn’t like him at first! I thought he was too tall and handsome — because girls hate that. A month later we booked a writing session and the rest is history.

Liam: We sat at the bar and laughed at a lot. Neither of us can remember much after that! I went on tour shortly after so we only saw each other about five times before we officially started dating about nine months later.

Zoe: Liam was in and out of town promoting his record Cicada so whenever he was playing near Toronto I’d hop on his tour bus and ride with them for a day which was so spontaneous and romantic.

Liam: Getting married was very much a decision we made together, so there wasn’t really the element of surprise. We started looking for rings online and casually told our parents we were thinking about it. I showed my mom and sister a couple of the vintage rings we had been looking at and my mom suddenly remembered that she’d recently found my Dad’s mom’s wedding ring which was exactly what we were looking for.

Zoe: I showed up at Liam’s parents house about 15 minutes after they found the ring and Liam was sitting on the couch holding his hands like a ring box. I think his exact words were, “If you don’t like this we’ll find something else, but what do you think?” And then I started crying a lot!

Zoe: We got married on Sept. 2, 2018. We’re going to France this summer for our honeymoon. One of my oldest friends is getting married in Grasse, France so we’re going to take a month or so and hang around Europe.

Liam: Honestly, we don’t. We’re one of those weird couples that does most things together.

Zoe: We haven’t had a lot of normalcy or routine the last seven years we’ve been together, we’ve moved a lot and both put out a bunch of music. We just work on whatever’s in front of us. And Liam’s my BFF. We’re probably a little codependent.

Zoe: Yes we are craft nerds. We love going to art galleries and hiking with our dog, Honey. I quilt and paint and Liam does some woodworking, and we recently put a pottery studio in our garage.

Liam: We talk about everything and we don’t wait to talk about anything that’s going to be a problem.

Zoe: Agreed. Luckily we have a pretty compatible conflict style.

Zoe: I hope to always be doing something creative. I don’t love the idea of retirement. I’m actually getting stressed out just thinking about it.

Liam: To me, retirement means I don’t have to worry about earning money but I still get to continue doing whatever interests me.

Zoe: OK, I can get on board with that definition.

“Name On It” is the third release from Zoe’s upcoming EP which is produced by Liam.